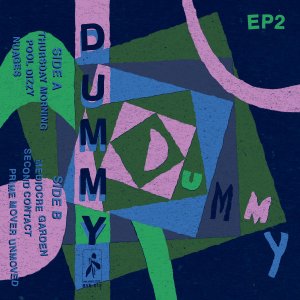 Dummy’s first EP was something of a triumph as it blended various styles together to create a telling moment. Can they keep it up on their second EP? Why of course they can!

EP2, which is mostly home-recorded using freeware and a smartphone, opens with the slow-burning Thursday Morning complete with some lovely effects from buzzing, crackling wires and what sounds like a musical box towards the end. The backing vocals work well on this one contributing to the atmospheric effect given off by the track. The Stereolab inspired Pool Dizzy has already cemented itself as a favourite at RIL Towers thanks to it’s endearing and fast-paced drone-pop. It’s one for the French Disko floors!

The swirling instrumental that is Nuages sees the band improvising with ambient, drone and the sound of space which blend into the following track Mediocre Garden quite nicely. The latter is a beautiful piece of electronica that sounds like the IDM peddled by Warp during the 1990s.

Second Contact is a short but imaginative electronic piece that sounds like the inner workings of a clock recorded for an obscure science fiction TV series. I told you it was imaginative. Final track Prime Mover Unmoved moves from ambient, drone, Krautrock and back being coated with psychedelic sprinkles and drawing inspiration from Spacemen 3, Pram and, thanks to the vocals, Stereolab once more. Endearing stuff for these strange times.

EP2 will be released on 6th November 2020 via cassette on Born Yesterday Records or digitally via the band. You can pre-order it from here.