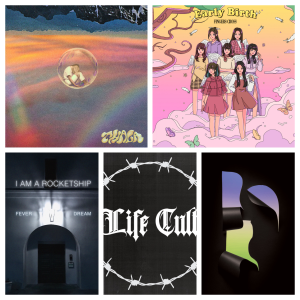 Fingers Cross are an all female Thai band whose debut EP Early Birth will be released by the Indonesian Label Gerpfast in January next year. Theory is the latest video to be released by the band (more here) and is a swirling shoegaze track – or idolgaze as they call it. My ears are still ringing. Early Birth can be pre-ordered from here.

I Am a Rocketship – Fever Dream

Atlanta’s I Am a Rocketship release their fourth album Lies and Legends on November 11th 2021. Fever Dream is the opening track and it’s an indie rock track with ethereal and shoegaze influences. There are nice repeating sounds all the way through. The band draw on from plenty of influences so expect a varied offering when the album is released. Talking of which you can pre-order Lies and Legends from here.

Life Cult are a band from Boorloo, Western Australia. Apparition can be found on their self-titled debut EP and is goth influenced post-punk inspired more than one UK goth band from the 1980s. It’s ear catching and if you like this type of music you cannot go wrong. Get that EP from here.

Thala released her debut album Adolescence last month. I have not heard anything from this Berlin based artist since the single Weep was released earlier this year and the catchy dreampop vibe sat well with me. Contradictions is another lovely dreampop track with a few nods to the 1970s and psychedelic influences and that voice sounds so good!

Adolescence can be ordered from either Duchess Box Records (Germany) or Born Losers Records (USA).

Film School – Take What You Need

Film School have raided their recent album We Weren’t Here for yet another single. Before I get wound up about a 5th single from a 10 track album it has to be said that Take What You Need is possibly the best thing the band have recorded to date. Swirling haunting synths resplendent with aching vocals as they plead “Just let me know, let me know” make this an essential listen. Both the single and album are available from Sonic Ritual.

One thought on “Thursday Bunch of Five”