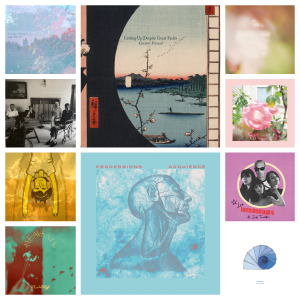 I had way to many Bandcamp Friday emails to wade through yesterday hence the lack of a post but this playlist reflecting of what I discovered or purchased fits the bill.

Here is the Playlist:

And here are the individual tracks/info:

Fuzzy is taken from the Japanese shoegazers latest album Eventually which is out now on Testcard Records. How am I not going to like a track with that title?

An indie rock track from the Nevada based Carter C that is just as catchy as it’s title. It’s out on his own label, Friends House Records.

Lovebirds is taken from the band’s third EP Las Infrarrojas & Indy Tumbita. It’s an indiepop track influenced by 1960s pop particularly the girl groups from that decade. The EP is a collaborative label release and is out now via Hurrah! Música and Family Spree Recordings.

Acquiesce is the lead track from the forthcoming EP that is due out at the end of the month. It’s the first track from the band in over two years. I say band but Processions have now downsized to just Phil Alfonso. Dreamy indiepop which is out now via Birthdiy.

Floating is taken from the Texan band’s forthcoming Heavenly EP that is due out in mid December. Old school noisy shoegaze. The EP will be released by Sunday Drive Records and can be pre-ordered from the label.

A nice dreampop track that suffers from a bit of too much polishing in places but the strong female vocals compensates for that. It’s taken from their debut EP of the same name. Cannot find out that much more about these New Yorkers.

Massage reveal their inner New Order on new single In Gray & Blue so much so it could easily be a long lost Brotherhood era classic. It’s taken from their forthcoming EP Lane Lines that will be released next month. The EP can be pre-ordered from here.

Corners Pressed is taken from the band’s forthcoming album IV. Another addictive indiepop track from these Texans! Lovely artwork too.

Don’t Come Home Too Soon is the opening track from the forthcoming album Summer At Land’s End which will be released on January 21st 2022 via Tough Love. Another dose of catchy yet gloomy indiepop.

Chasing Shadows is taken from the wonderfully named Love Songs to Remind Us That We Can’t Stand Each Other long player that is out now. It’s a fine bass driven post-punk track with its influences being with the revivalists rather than the originals i.e. Interpol rather than Joy Division. Most good and more delights can be found on the album.