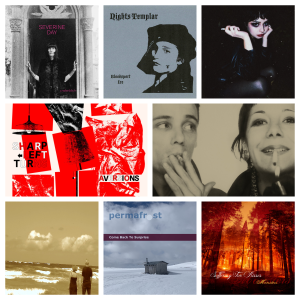 A round up of releases under the heading of post-punk that has caught my ear this past month.

The minimal wave band Deux were formed in Lyon in 1983 by Cati Tete (vocals) and Gérard Pelletier (synthesizers). They released two singles before fading from from view. Golden Dreams, originally released back in 1985, is the title track of a new repressing of an EP that was released in 2012. The tracks have been remastered and are now available as a limited Edition 12″ Gold Nugget 180 gram Vinyl 12″. Sadly Pelletier died in 2013 aged just 60 years old but the label Minimal Wave have done a great job in keeping the bands memory alive.

Pour un silence is a synth-pop track that features some Peter Hook style bass. It’s a vibrant track that “is about the quest for calm and silence.” Trouble is it’s too catchy for that quest to succeed.

Opening like a slowed down version of Blue Monday Club De Vampiros by the Chicago based French Police is the sound of the post-punk dancefloor with it’s beats and goth vocal style. It’s backed with Plant Based Girl in which our protagonist realises they should not have let their lover go. Very, very good.

Severine Day is a Brussels based artist and film maker. Previously in the short lived Belgian synth band Emma Peal the Unsterblich EP is her debut solo release. The EP is very dark and moody with it’s roots firmly placed in the history of her city’s post-punk and coldwave past. Closing track Exploding is my pick of the four.

Sometimes I think Suffering For Kisses only have the one tune but then if it’s not broke….. Tony D’Oporto’s distinct vocals glide over the darkwave beats as he painfully sings “Everyone’s a hero and everyone’s a monster.” Yeah, it may be just the one tune but it’s a bloody good one.

Permafrost – Come Back To Surprise

The Norwegian post-punk band new single Come Back To Surprise encompasses influences from the early 1980s which incidentally is when the band originally formed in their native Oslo. They take their name from a Magazine song after all. Lots of early Cure influences on this one and the drums do sound a bit like In A Lonely Place at times. But that’s a good thing yeah?

The new EP from Canadians Aversions features the staple ingredients found on 2020’s debut Base Portrait. Punky, sharpened guitars resplendent with Sam Coll’s spoken shouty vocals as he takes apart a range of various subjects. Sounding like A Witness, The Fire Engines and US hardcore punk bands the EP is packed to the rafters with energy and intense feelings. Powerful stuff.

I have been enjoying Nights Templar’s experimental and minimal synth for a while now and the new double-a sided single Bloodsport​/​Ice carries that run on. The former has some quirky Aphex Twin style sound mixed with the repeated coldwave beats whilst the latter mixes dialogue with more of the same.