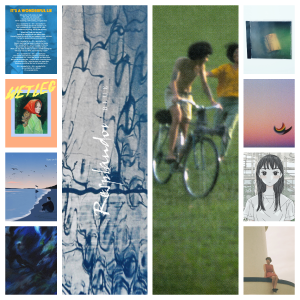 Another 10 recent releases for you to get stuck into.

Here is the Playlist:

And here are the individual tracks/info:

Blue is the second single from Resplandor’s upcoming album, Tristeza, which will be released in early 2022. Mixed by The Cocteau Twins Robin Guthrie.

Tumule is one side of the Bruxelle’s based Turquoise new single. It’s quite Lush-ious if you get my drift.

The beautiful new single from the New York based dreampop artists. And art is exactly what this track is.

Extremely catchy and addictive second single from the Isle of Wight duo. It’s out now via Domino Recording Co Ltd.

The new single from the Seoul based band. It’s backed with Angel in White and is out now via Cloudberry Records.

Dijangka/Matahari are two songs written by the band after finishing their 3rd album Nature of Things with both being a mix of dream and indiepop. Available in 7″ vinyl and digital formats from Middle Class Cigars.

Tears Underwater is the third single to be lifted from the forthcoming album Patronizing Self-Help from the former When Nalda Became Punk member Elena Sestelo.

The title track from the new album from 宇宙ネコ子 (Space Cat Child). The album is currently available on a pay what you want basis from here.

Taken from the forthcoming album Waiting For Oblivion which will be released by Citrus City Records on November 5th 2021. It can be pre-ordered in Cassette and digital formats from here.

One thought on “The Midweek Sampler”